In a couple of days, our firstborn will be embarking upon her next journey in life in London.

It feels surreal, and I'm having mixed feelings about her leaving us to pursue her dreams thousands of miles away from home.

Hanna being Hanna, I know in sya Allah she'll be okay. She's very independent. Too independent for my liking sometimes.

I know she's very excited, and I understand how she feels, as I was in her shoes 29 years ago. Starting out in a foreign land, meeting new people, learning new things, facing new challenges.

Ayah and I will be accompanying her there to settle all the necessaries, and we will be spending Raya Haji with her. And we will be catching the flight back to KL later that day on Hari Raya Haji itself.

We have done about 90% of our packing. So far, we have filled 4 suitcases to the brim - with Ayah's and my stuff occupying only half a suitcase. The rest are all Hanna's.

Whatever we could buy and bring from Malaysia, we're bringing them with us. Even dishwashing sponges! And Good Morning and kitchen towels, too. Hehehe...

The stationeries that she has packed to go with her could probably last her a year. Or two.

And of course - all the pre-mixes gravies which she only needs to add chicken or fish or beef to to have a decent meal there, while learning how to cook the real thang.

And all the rempah-rempah wajib, and Milo, and Nestum, and Crispy Prawn Sambal, and instant noodles, and all the medicines she may need. And we are still contemplating as to whether we should bring a bottle of Kicap Manis Habhal Cap Kipas Udang with us or not. Boleh?

A rice cooker, a mini blender and an air fryer are also nicely packed in the bags. Hopefully she will know how to use them one day. Hahaha!

So, basically - she just does not have any reason or excuse to go shopping in London as we have made sure that she has got everything that she needs - at least for the first 2-3 months she's there. Mommy and Ayah very clever, eh?

Anyway, will update on how bad the banjir at Heathrow nanti when we finally leave our baby to fend for herself and live her dream in London - a dream which she has kept alive since she was 5 years old, or maybe even younger.

So, APPARENTLY, I had forgotten that my current glasses were actually multifocals. That was until last night when I decided to get a new pair and the optometrist asked me if I wanted another multifocals or just the normal ones.
And I told him, "Oh... my current glasses are not multifocals". And he said, "Errr, they ARE multifocals". And, I said, "Errr, I don't think so!"
Yes. I was arguing with an OPTOMETRIST that my glasses were not multifocals... How's that for a "duhhh" moment, eh?
Anyway, the theory was - APPARENTLY, the design of the glasses is such that the lower part of the lenses is too near my face that its function as a reading glass was not that effective, and APPARENTLY, because of that, yours truly had made a separate pair of reading glasses for myself and had intermittently and interchangeably used both glasses as and when appropriate and required for the last 2 years. Until I totally forgot that the glasses were actually multifocals. Until last night that is.
So, I decided to wear them in a different way this morning to adjust the distance of the lower part of the lenses from my face.
And walllaaahhh!! I could read using the glasses without any problem at all all right!
*So, to all my students and colleagues - If ever you guys see me going out of my office like this, please pull me to the side and ask me to move the eraser from my nose, ya. Takut terlupa :) Thank you. 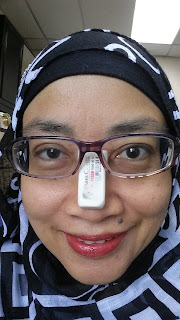 P/S : The title of this posting was inspired by Bang Med (Hamed Samad)'s comment on my FB. Thank you, Abang Med :)
Posted by wanshana at 1:25:00 PM No comments:

It's our 21st anniversary today

It's that time of the year again - the day Ayah and I celebrate our wedding anniversary. It's our 21st today. Syukur alhamdulillah...

We have come a long, long way since our cerita chenta which started more than 31 years ago. And we are 31 years older and wiser now, in sya Allah.

And 10 years 5 months and 14 days after knowing each other, on 9th September, 1994, I became his lawfully wedded wife.

So, all in all, we have known each other for 31 years 5 months and 14 days today. That's more than half of our lives - 21 years of which as a married couple.

He can be a very difficult person to live with sometimes. And I know, I am, too.

He can be a jerk sometimes (Hahaha!). But, I know I can be a bigger jerk than him. So, I just let him be a jerk when he wants to :)

He is one of the most responsible person I have ever known. But, I can't say the same about myself. And I'm sorry for that...

He is a wonderful and great provider for me and the kids in all aspects - love, support, and all kinds of stuff - worldly and spiritual. And I hope, I reciprocate that.

It has been a wonderful journey for us with all our ups and downs, our colourful and grey moments, the storm we had to go through, the rainbow that always came out after.

Even with all the downs, all the greys and all the storms manyfold over, I would not trade the last 21 years (and the last 31 years, too, for that matter!) for anything else.

I hope you know that I love you so very much...

That was about 1 year and 8 months ago.

And I feel that I must write on the most significant event in my life which happened during the long hiatus, before I go on writing on my usual ramblings.

You see, my Mom lost her battle against Non-Hodgkin Lymphoma Cancer just before 2:00 pm on the afternoon of 29th June 2014 - the 1st day of Ramadhan last year.

We knew Mom did not have long to live, but, we did not expect her to leave us on that day. The night before, I fell asleep sitting beside her, my head resting beside hers on her pillow, my hand holding her hand. And when it was time to leave, Tuan Doktor woke me up, and in my daze, I kissed her forehead lightly as I did not want to wake her up. She slept through it all.

I had replayed that moment over and over again in my head, wishing that I had woken her up then and wished her a proper salaam and good night and given her a proper hug, than just planting a slight kiss on her forehead. That could have been the last moment that I spent with her being fully conscious of my presence in her room with her. A moment which was not meant to be.

The next day, we received a phone call from my brother-in-law at 12:30 pm, asking us to leave everything and hurry to Keramat as Mommy's condition had suddenly deteriorated. As Tuan Doktor was attending to an emergency at the hospital, we could only leave just after 1:00 pm and reached my sister's house around 1:30 pm.

Everything happened so fast, but, Alhamdulillah, Abah, all her children and grandchildren (save for a couple) were there with her right until the end. She passed away peacefully just before 2:00 pm, surrounded by her family.

Even though she had pesan that she wanted her burial to be done as fast and as expediently as possible, with it being the 1st day of Ramadhan and all, we could only arrange for her pengkebumian to be carried out the next day.  Alhamdulillah, segala urusan dipermudahkan and jenazah Mommy dikebumikan just before noon.

I was in a daze for most of the time in the few days that followed. It was surreal, and everything felt like it was a dream. In fact, the few months that followed saw me sometimes reaching out for the phone to call her to ask for recipes and cooking tips only to realize that she was no longer there for me.

How I wished I had spent more time with her, called her more often, spent more on her, hugged her more often, and looked into her eyes more, held her hands longer, smelled her hair every time I saw her, kissed her hands, and told her just how much I loved her at every possible opportunity I had when she was alive.

I had pondered on so many of the "If only's", but, Allah lebih sayangkan Mommy.

I miss you so, very much, Mommy.