I was cooking dinner tonight, with Daryati helping me with the ingredients and also the washing up, and we were just talking about what Hilman did the whole day today while I was at work. Hilman had missed 3 days of school due to his asthma and he needed his Ventolin puffs every 4 hours, and the only way that he would get his puffs at a regular 4 hours interval was for him to stay at home. He's also on Prednisolone and Diphenydramine which can cause drowsiness. So, just to make sure that he gets the right dosage of all the medicines at the right times, and so that he would get the rest that he needed, staying at home was the answer.

Me : Lucu? Mengapa? Apa yang Hilman buat yang lucu? (Funny? Why? What was it that he did which was funny?)

Daryati : Tadi makan siang Hilman minta saya gorengkan ikan, jadi saya gorengkan satu ekor ikan kembung untuk dia. Kemudian saya hidangkan di meja. Siap duduk, dia minta pisau dari saya... (This afternoon, for lunch, Hilman had asked me to fry some fish for him, and I fried one spanish mackerel for him. After that I served the fish on the table. Right after he sat down, he asked for a knife...)

(Yes...So, I asked him what did he want the knife for, to which he replied, "I want to cut the fish and save some for my Ayah, Mommy and my sisters")

(So, I told him - "There's no need for you to keep the fish for your Ayah, Mommy and sisters because I did not fry all the fish. There are still a lot more left in the freezer. If Ayah, Mommy, Hanna and Hasya want, I can fry for them fresh. So he asked and said, "Makcik, those uncooked fish - are they enough for everyone?" So, I told him, "Yes, there's enough...there's no need for you to cut your fish. You can finish the whole fish...")

And Daryati said, after hearing this, Hilman then asked her if she wanted some. And when she convinced him that she didn't want any, then only Hilman took the whole fish....and finished it under 5 minutes!

Hilman is by nature a very considerate and a very sensitive boy who has a very soft heart, and always thinks of others before himself. What happened this afternoon showed that he could, if he wanted (and which he DID. Hehehe!) finish the whole fish himself. It was just a very small ikan kembung, but, he was thinking and was more worried that we would not get to eat the fish like he did, and that was why he wanted to save some for us. 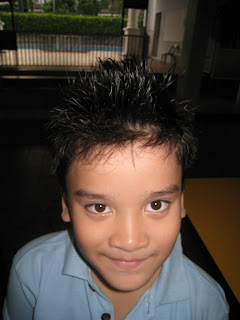 Our sweet, sweet boy - Hilman. Taken after one of his swimming lessons some weeks ago.
Posted by wanshana at 11:34:00 PM

wanshana, Hilman is one sweet boy!! You are blessed. Do you know, I thought the name Hilman is quite rare. My nephew - another sweet boy - is also Hilman. He is only abt six but he cares so much for his ageing grandma (My mak).
Your Hilman sounds so considerate putting others first before his needs.

He 's gonna break hundred of hearts with his look but...

He's going to steal a million hearts with his thoughtfulness!

What a good looking boy you have.

Thank you. Yes, we are blessed, indeed. He is very thoughtful of others.

There was one time when we went for an outing without Ayah, and everybody got something for him/herself, and when it was time to go home, he insisted that we should also get something Ayah.

I just could not think of anything then (Ayah prefers to try out his own clothings for the right fit/size, etc), and we ended just tapau-ing some Chicken Rice from TCRS for him. That was fine with Hilman - as long as we had something to bring home for his Ayah :)

Thank you. I hope it will be more of the latter than the former, though ;)

Hilman is quite a looker, so we've been told, even by strangers sometimes! Our next door neighbour, Mrs. Kang calls him "Handsome Boy". Hehehe!

So, we decided - 50/50 la kot? Fair and square this time coz' his sisters MEMANG CONFIRMED have (MUCH) more of Ayah's genes! So, neither of us can take full credit for Hilman's looks la! Hahaha!

Syukur Alhamdulillah. Whatever it is,it is the work of Allah SWT :)

Terlupa pulak tadi - the name "Hilman" was quite rare before this. But, I think it became popular at the turn of the millennium. There are quite a number of 0-9 year old boys with that name now :).

His full name is Hilman Syauqi. Hilman means "Courteous"/ "Kesopanan", while Syauqi means "Kerinduan". I guess his name does reflect his personality perfectly.

Mommaaay,
Hilman saje je behave himself so you'll write another entry about him, pffffft!
I say Hilman looks more like you, because he has the same nose as you, hehe ;D
I wonder how Hilman will turn out when he's 13.

It's okay, nanti Hanna behave, I'll defintely write about you pulak. Waaaa....boleh jadi some kind of incentives to behave pulak, ya?

Ada orang lain dah jealous tu.. As you said, a good incentive for them to behave, so that Ibu boleh update blog..

One biiiiiiiig hug from Aunty Fifi to Hilman too. How thoughtful. Sigh....... ;)

So, up to them whether they want the world to know about the positive OR the negative things about them ;) Hehehe...

I'll make sure Hilman gets the biiiiiiiig hug from Aunty Fifi ;)

Kids can really bring lumps to our throats, and well up our emotions and our eyes with all their simplicities, innocence, and sincerity, kan?

Let's make do'a that anak-anak kita will never grow out of these virtues. Amin.

ok i'm amazed. for a young kid to be so thoughtful is admirable he deserve all the toys in the world.

go ahead hilman. push your luck. ask Mommy to get that something you've been pining for ages...hehehe...

Anyway, if we were to list down all the stuff he has been pining for, tak cukup 40 kertas kajang nanti... Tak larat nak layan :) But, he'll definitely get something on our next outing nanti, insya Allah (which means we'll end up buying something for everybody coz' he wants everybody to be happy :))

elviza - he already stole my heart!!!

hugs to hilman ... and of course to hanna and hasya and to you too!

That was very very sweet of Hilman, but then again I am not at all surprised. It is in his nature to be nice and thoughtful. But he is also so lurus bendul that he gets bullied by his sisters...shiaaaan :)

And, thanks for doing the tag, dear. I dah baca, tapi tak sempat nak leave comment lagi. Will do soon.

Brought him to see Dr. M*sa this morning for follow-up. He's much better now, but he was advised to use the Ventolin puffs everytime before he does sports for now. Hopefully he'll outgrow this, insya Allah.

Oh ya...have already hugged him for you and Fifi ;)

If you knew him personally and could imagine the way he speaks, his facial expression and all, LAGI tangkap leleh...

About being bullied by his Kak Ngah (especially) and Kak Long, I don't think he realizes it pun when they bully him, kan? Hilman being Hilman, he probably thinks it is their prerogative as his older siblings!

Shana,
Im' sure you and Ayah are very proud of Hilman, and you are, right?
Kami yang membaca ni pun bangga jugak... ada anak muda macam ni in this age and time. Aaaah there's hope!

Just to share with you all, our kids ni ada satu lagi habit - everytime they want to eat or drink anything at all, (especially snacks or anything from the fridge), they would ask my permission first.

In a way, that's very good of them, but, aiyoooo...I tell you -those who don't know us might think that we are starving them or are rationing their food at home!

The thing is - we never taught or asked them to do that. Dunno where they got this habit from. But, I'm not complaining ;)

Anyway, eloklah budak-budak ni mintak permission, etc. It's a very good habit. Tak kisah lah if permission is asked even to go to the toilet!

Have a good weekend!