To some, I might have been a wee bit (an understatement?!) too emotional last week when Hanna got her UPSR results. After all, it was ONLY UPSR, right? It wasn't PMR or SPM, or STPM, and it was not even her Uni exam - all these exams being the actual keys to pave her future.

However, it may not be so much of feeling anxious for Hanna. Rather it was more of a guilt trip for me, I guess. For some of you who are new to this blog, you all might not know that I was away from the family for 7 months (November 06-June 07) - meaning for the first 6 1/2 months of this crucial year for Hanna, I was not here for her - to guide or supervise her in her studies. Everything was left to her and her tuition teacher, Puan Ya*untha, who came 3 days a week to Mak's house to coach her. My contribution in that 6 1/2 months : I would call to talk to Hanna and her adek-adek twice a day everyday without fail so that they would not feel my (physical) absence. So, I was REALLY anxious as I was worried that THAT could have affected Hanna's performance (and Hasya's and Hilman's performance, for that matter).

Anyway, for those who have been following this blog, you would have remembered one of my earlier postings when Hanna was grounded. But, last weekend, as a reward for her 5As, and also because it was her birthday (Saturday 17th November), Hanna was officially UNgrounded, and she was allowed to have some friends over for a special dinner prepared by her Aunty Adek (my sister-in-law) at Mak's, after which they came for a sleep-over at our place in SD.

Aunty Adek who is a die-hard fan of Jamie Oliver volunteered to cook for Hanna's birthday and UPSR celebration. She slaved over the stove and oven since 8 a.m Saturday morning until 8:30pm Saturday night - preparing an All-Jamie-Oliver menu. And moi - my sole contribution was my "Spaghetti Olio" (or as my kids would call it - "White Spaghetti"). 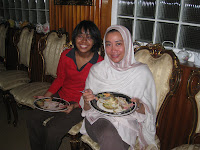 * The chef with moi.

And oh yes, that morning we all also had a special treat when AYAH (Yes, you read it right - AYAH!) prepared breakfast for all of us. For HIS standard, I think he also came close to Jamie Oliver....NOT! Hahaha! 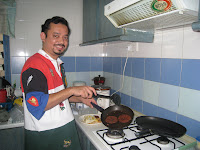 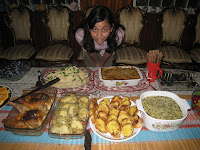 It was also my Mommy's birthday on 14th November, so it was a double celebration (or rather TRIPLE - if we include Hanna's UPSR celebration. 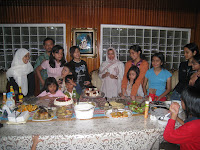 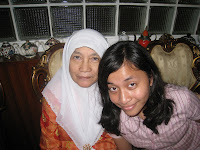 The next morning, we brought the kids to a skating outing at S**way Py**mid. Imagine supervising 7 screaming/giggling girls (plus Hasya and Hilman who only joined after their traditional dance class at 1:30p.m) from 11:00a.m until 3:00p.m! 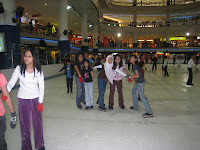 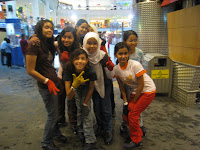 * Hanna and friends at the skating rink.

We went back to Mak's house for Zohor and Asar, before proceeding to John*y's at Jaya Section 14 to continue with the celebration. We had the usual Steamboat, etc and sent everybody home after that. By the time the last girl was sent home, it was already 8:00p.m, and both Ayah and I were already like "kain buruk"... 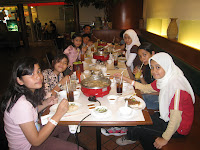 But, it was all worth it. Everybody had fun... HANNA had fun...after all we were all celebrating her...

Ayah and Mommy love you very, very much. And we're so proud of you!
Posted by wanshana at 7:53:00 AM

That must have been the sweetest gift for her, being ungrounded & having friends over.

Happy 12th Bday Hanna! and congratulations with ur great results. Have a blast yea! xoxo

Happy b'day to Hanna and Jaddati!!

Thank you (on behalf of Hanna and Jaddati) for the wish and do'a.

Yes, she had a blast over the weekend having friends sleeping over. Yang peningnya - her Mommy and Ayah le...

I really don't know what time the girls finally went to sleep that night (or if they actually did at all?!)

This weekend will be another full weekend - we're going to Lan**a*i for 5D4N! Yippee!!! This will probably be the ONLY outing out of KL for us this cuti sekolah ni, so I want to really make full use of our family time there and enjoy each other.

Thank you, thank you!!

And YES!!! MUST GET 2GETHER! Have to plan "plorperly" looorrr...Cik Abangs kita asyik sibuk memanjang..

This weekend Lan**a*i trip is actually a "tumpang sekaki" trip for us. Haizal has a meeting to attend, and we're just extending our stay another two days after that.

Thank you on Hanna's behalf.

The problem is - she has not stopped having a blast ever since the UPSR results were out!!!

Thank you on behalf of the birthday girls.

Hmmmm...Hanna has actually read most of the comments for my last posting, but she somehow coud not find the time to reply them. I will try to sit down with her one of these days, so that she can write her personal comments and thank yous.

Happy Birthday Hanna. What a celebration... with your 5As and all. You'll remember this for a long long time.
Shana,
And sampaikan salam harilahir to your mom too.

I like this entry. I really do. Lots of food!!!

Insya Allah, I will convey the birthday wish to my Mom. Thank you.

Hmmmm...what I failed to mention in this posting was that we also attended a belated Raya Open House at my biras' parents' place on Saturday afternoon. They had the hawkers stall concept - roast lamb, char kuey teow, tauhu bakar, rojak, satay, Laksa Penang, ABC - the whole lot!

You would have liked the posting more if I were to include that, I guess? :D

without you by herside for half a year and she did performed well, thats something.

She will have great things waiting for her, insyaALLAH.

I've been a silent reader of your blog sebenarnya :) - selalu dok bloghop from Mior's and Che gu's.

Syukur alhamdulillah, Hanna is quite an independent kid. But, at the end of the day, I have to say that her teachers (tuition and at school), played a big part in her achievement. Of course, I'm also grateful to my MIL with whom Hanna and her adek-adek, and Ayah stayed over the 7 months I was away. Dan tak lupa juga saya mengucapkan terima kasih kepada Ayah yang terpaksa menjaga anak-anak selama ketiadaan saya di sini - chewah... macam nak terima Anugerah Bintang Popular la pulak... :D

As parents, we can only make do'a that anak-anak kita will have a bright future ahead of them, insya Allah. Amin.

Yeah, that day was fun fun fun!
Thankyousomuch, Mommy and Ayah! ;D
After this, you two chaperone us for more noisy outings, okie? :DDD

wanshana, congratulations! There are so many happy parents! And I am also a very happy aunt!

happy birthday (belated) to hanna..and congrats on the 5A....
congrats to ayah and ibu too.

what a happy occassion!

Congrats Super MOM!!!! (you must be beaming endlessly...)

happy birthday HANNA!.. You deserved to be ungrounded for the rest of the this year! (hehe another 5 weeks to go)

Shana, it looks like the kids really had fun. I remembered my Mia celebrated non stop until school reopens! hehe.

So apa hadiah yg hanna dapat for her 5As?

It is a good morale booster for the kids to have all the support around them (even if they did not get 5As) Everybody should rally around and offer several rounds of encouragements for them to strive hard(er) :D

Thank you :D, insya Allah, I akan sampaikan to my mom. As for Hanna, I think she will be checking the comments later, and I'm sure she'll be smiling when she reads your birthday and congratulatory wishes for her.

P/S : I still have not had the chance to have some Kitchen Moments with the kids laaa...

Thank you! :D I will sampaikan your ucap selamat to my Mom, insya Allah.

Yes, it was a happy occassion indeed. We make do'a that there'll be a lot more of these moments to come, insya Allah. Amin.

Yes - beaming since 15th November until now...and my jaw hurts like crazy!!! Hehehe!

OMG! 5 more weeks to go before the new year?!!! I didn't realize that until you mentioned it, you know?

Hanna's hadiah for getting 5As? Ayah and I are still trying to work on a surprise-thingy-which- we-would-not-have-allowed-otherwise for her. Hopefully it'll be good news for Hanna. Watch this space for updates! :D