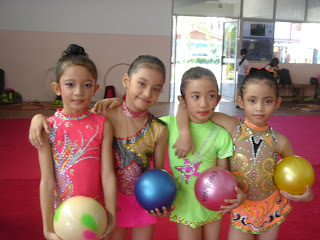 And we know it’s the right one…

After a few months of deliberating, both Ayah and I finally gave in and told Hasya that she could stop going to gymrama (rhythmic gymnastics). She had been asking to stop going for training (I prefer to use the word ‘stop’ here, rather than ‘quit’ as the latter does have a negative connotation to it, and in Hasya’s circumstances, she is NOT quitting per se).

Hasya first joined her school gymrama club in January 2006, and not long after that, she was selected, together with eleven of her friends from school, to go for training to be absorbed into the State team eventually. Suffice to say – it involved a lot of sacrifices, not just by the kids, but also by the parents and the kids’ siblings, especially in terms of time.

The girls had to train in SA from 8.30 until 11.30 (3-4 days on weekdays) and, after training they had to head straight to school which would normally end at 6.00pm! So, you can imagine how taxing it was for them. And they had to do their homework every night before they went to bed because they would not have the time to do it the next day as they had to wake up really early and go for training (again) the next day!

And, on Saturdays (or even Sundays, and during school holidays, if they were preparing for a competition) they would train from 9.00a.m until 4.00pm or even 6.00pm! So, you can imagine just how exhausting it was for these girls, and also for us parents, who amongst us had worked on a schedule on who would send and/or fetch the girls to and from training on which days, etc. And it didn’t help when some parents just didn’t think that there was any need for them to volunteer since the other parents were ever so willing to send and fetch the girls! (Duhhhh…it’s common courtesy, okay?!)

For the last one year, EVERYTHING revolved around Hasya’s training schedules. Our holidays, our outings, our weekends, her siblings extra classes, etc – EVERYTHING had to be scheduled so as not to clash with her training. Hanna and Hilman had been real sports and never complained, and they accepted everything as it was (even though Mommy and Ayah felt so guilty, so, so many times for depriving them of the holidays or the outings that were promised to them… ) Thank you, my dearest Chinchin and Chiman – for such understanding, at such young ages…Mommy and Ayah are SO PROUD OF YOU GUYS!

Needless to say, the number of girls going for training dwindled over the months and from 14 of them (including 2 from a different school), at the last count, it has now gone down to just 5 in the team. Some just did not make the cut, one girl moved to another state, some just quit, and some – the parents just couldn’t see eye to eye with the coach, which is a REAL SHAME since their daughters were REALLY good, and could have been REALLY outstanding rhythmic gymnasts representing Malaysia one day, should they have continued training under the MSN programme!

BUT, it is PRECISELY because of this last reason that Ayah and I decided that enough is enough, and we are not going to let Hasya be subject to further torment which has been demoralizing her bit by bit for the last few months. She had been yelled at, screamed at, humiliated in front of her friends, being called “FAT” so many times….by her own…coach. Yes, it is understandable that to be in the State team, one has to be tough. And Yes, it is understandable that to be a state gymnast, the girls need to be light and agile. But, there is no need whatsoever to call them “FAT”, when they weigh 20kg when you want them to weigh 18kg! Just look at the photo - do the girls look "FAT" to you guys?!! (Hasya is the one on the far right, by the way)
Both Ayah and Mommy SERIOUSLY think that MSN should send all their coaches (ESPECIALLY this particular one!) to Child Psychology courses so that they can be more effective and be more professional, so that the little athletes under their wings can grow up to be really BIG, wholesome and confident international sports personalities, and not be psychologically humbled by constant degrading remarks from the coach!

The last straw for Hasya was last week when she was just winding down and was wiping her sweat away when the coach accused her of sleeping (and she swore she was not!! And I know my daughter and I believe her), and the coach asked her to pack her bag and leave the gym, and literally screamed at her, “GET OUT, I DON”T WANT TO SEE YOUR FACE HERE ANYMORE!!!”

It must have been the time of the month for the coach, or she must have had a foul time somewhere else, and she was letting everything out on the trainees that day, maybe…BUT, for Heaven sake, she’s only EIGHT years old, you moron!

I have to agree that the coach has the skills to teach the techniques, and all. BUT, regretfully, and unfortunately - she just doesn’t have the experience and the people skills when it comes to dealing with kids Hasya’s age! I guess because, she is a kid herself – barely an adult! She’s probably, what 20? Maybe 24 - tops?

I hinted to Hasya yesterday that she could stop going for gymrama, and when I told Mak the news, she gave a sigh of relief and immediately asked Hasya what she wanted for dinner – apparently the poor girl had rationed her food intake for the past one month so that the coach would not call her “FAT” again! And it just breaks her granny’s heart every time Hasya refuses to eat! I would just shake, rattle and roll WITH ANGER, mind you, when I think of this!!!

It is such a shame that MSN has this rule that only those who had represented Malaysia at a certain level (SEA Games? Commonwealth Games? At least?!) could qualify to become a coach for MSN. That means – they don’t really have many choices do they?! And, at the rate this coach is going - chasing all potential national rhythmic gymnasts away by her unprofessional approach, I doubt if Malaysia would have any local candidates left to coach the State (let alone the National!) team 5-10 years down the road!
Hence we see all these foreign coaches training our athletes! Malaysia Memang Tak Boleh…

So, Mommy and Ayah decided to decide on this matter by today, Sunday 1 April 2007, the day Ayah will be arriving home from his Beijing meeting. We had asked ourselves - at the end of the day, how far do we really want Hasya to go with this gymrama thing? State level? National level? International level? And more importantly, is it worth all the sacrifices that EVERYBODY has to make, ESPECIALLY when we realized that all these while, it may have been that it was what WE wanted her to be and do, and NOT what SHE really wanted to be and do…But, whatever it may be, we have no regrets, in the sense that the experience she had gained in the last one year or so had been really precious, and we know she will remember and treasure forever!

To all Hasya’s friends who are still going for training in SA - All the best, my dearest little gymnasts! And to their parents – May God bless your sacrifices and patience (especially with the coach!).

To all the parents who have kids who are training or doing something - maybe at Hasya’s level or even higher, wherever you are…If you KNOW that THAT is what your child wants to do, God bless you for letting him or her do it, and God bless you and your family for all the sacrifices you have made and have to make for the sake of your child….All the best to all of you…

Hasya seems much more relaxed now. She looks a happier girl. Hasya is such a talented girl but it broke my heart each time she came home looking so unhappy. You know how she is... She won't tell anyone anything about her inner feelings... let alone to her dad! She would bottle it up...endure the pain...but would never shed a tear. But in the days leading up to her quitting, I could see just how unhappy she was. That was when I said "enough is enough". I wouldn't want our daughter to live through her childhood days being ridiculed and abused verbally...and to some extent, physically. She didn't need that. I'm really glad we're together on this. We would do anything...absolutely anything, to make our kidz happy and successful.

I know...I can hear it in her voice whenever I'm on the phone with her now, so chirpy, witty and happy - back to her normal self! When she's happy - Mommy is happiER! (And Ayah, too, I'm sure!)

But, Hasya told me that her K.Long Hanna has been making sure that she does all the warming-up stretches/exercises and all at home EVERYDAY (without fail!) so that her body stays supple and flexible!

Hmmmm....Maybe, we can ask Hanna to be the new coach?! Hehehe!

Whoaaa...hang on! Hanna can be WORSE than that woman u know! But at least she would communicate with us! Hahaha... Jokinglah Hanna :)